Genets: Top 10 Facts And Benefits Of Having Them As Pets Genets are mammals that are found throughout Africa, Europe and the Middle East.

Quick Navigation
10 Facts About Genets
1. There Are Two Main Types of Genets
2. They Are Nocturnal Creatures
3. They Have Unique Reproductive Characteristics
4. They Have Advanced Forms of Communication
5. They Can Stand on their Hind Legs
6. Their Diet is Varied
7. They Can Exhibit Strange Behaviors
9. They Face Many Threats
10. They Are Kept as Pets
The Benefits of Having Genets as Pets
The Drawbacks of Having Genets as Pets
Final Thoughts on the Future of Genets

In this section, 10 of the most interesting facts concerning these creatures are discussed in greater depth.

1. There Are Two Main Types Of Genets 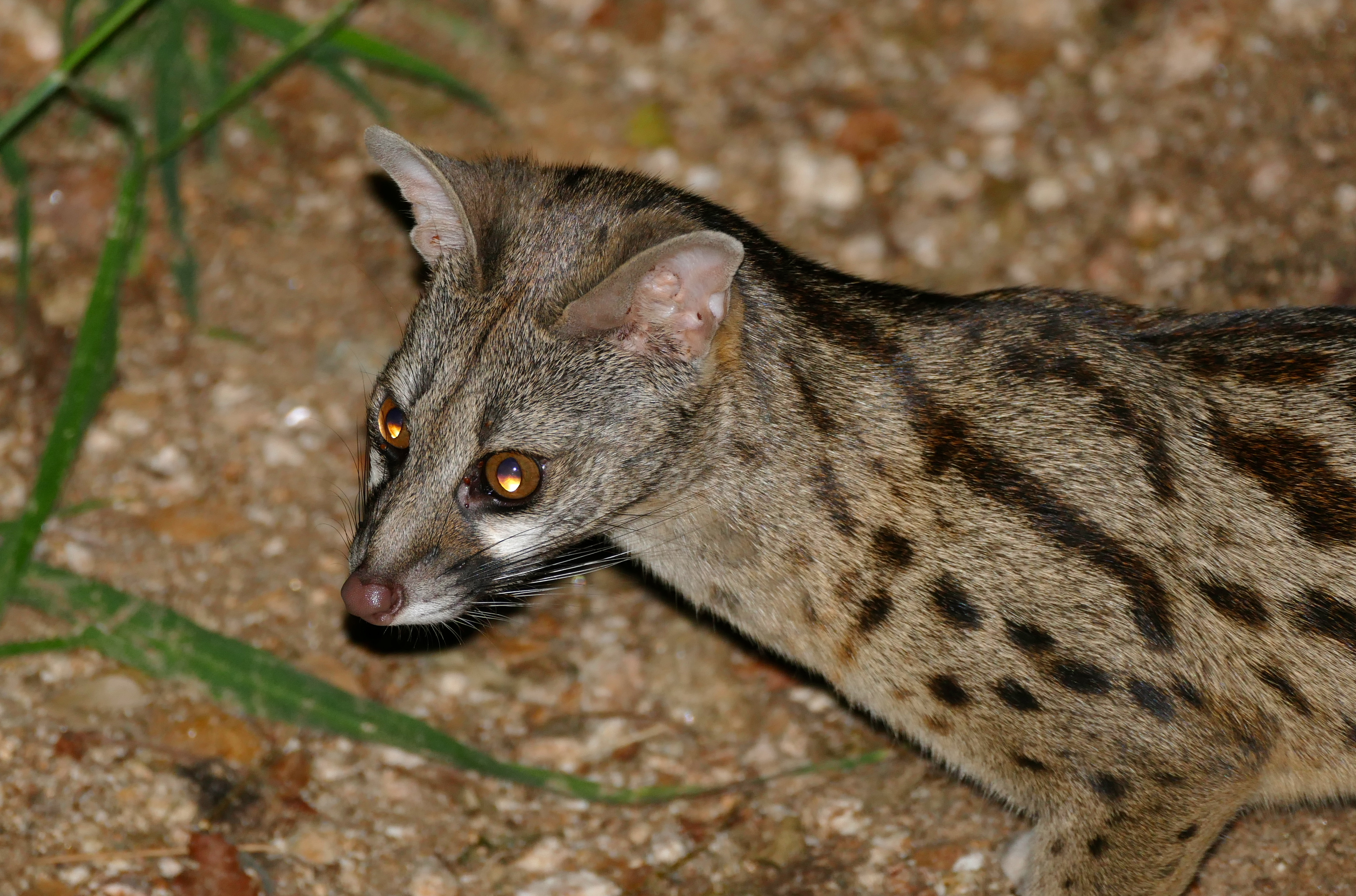 There are two main types of these creatures, namely small-spotted ones and large-spotted ones.

Small-spotted genets are also known as the common genets and are the only kind that is present in parts of Southwestern Europe and Western Asia. Most genets are found in Africa.

Each type of genet has slightly different characteristics when it comes to appearance.

The small-spotted has more distinct black and white markings. They also have a long crest of black hair that can be raised when the animal feels threatened.

Large-spotted genets have a shorter crest of hair, brownish spots, a light-colored chin and a tail that is black-tipped. The small-spotted ones, on the other hand, have a black chin and a light-tipped tail.

All types of these creatures have retractable claws that allow them to be very versatile. They are arboreal creatures, though they also spend lots of time on the ground.

These creatures range in size from two feet to four feet from head to tail. Their weight ranges from two pounds to over six pounds depending on the variety.

2. They Are Nocturnal Creatures 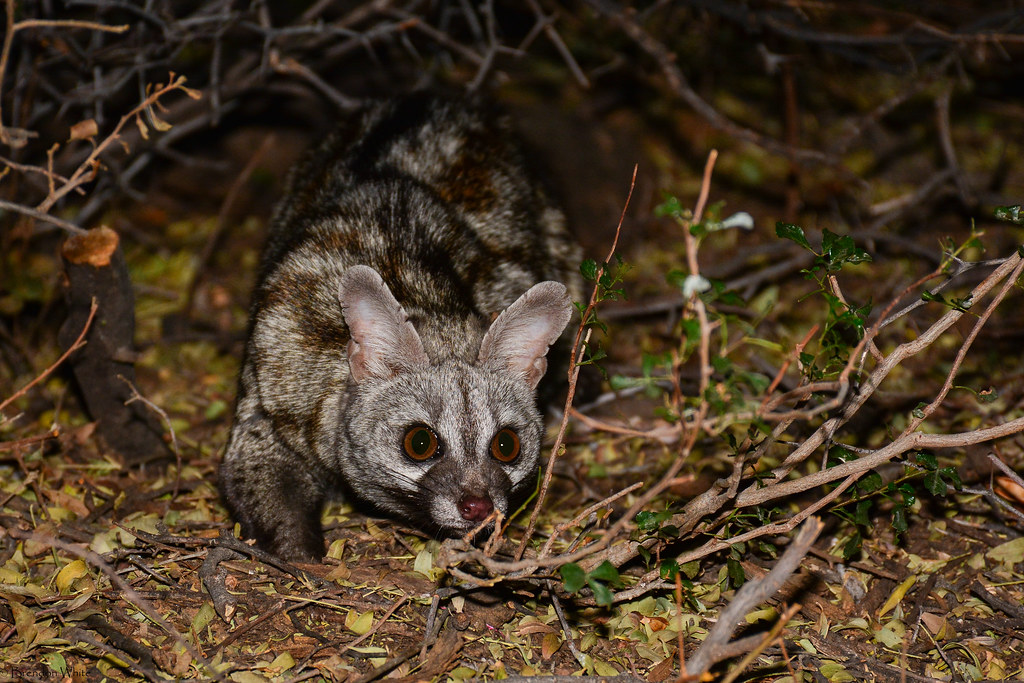 Genets are nocturnal creatures, meaning they are more active during the night.

Some of these creatures have been noted as appearing at twilight.

During the day, these creatures usually rest in trees. At night, they usually hunt on the ground, using their speed and stealth to capture prey.

3. They Have Unique Reproductive Characteristics 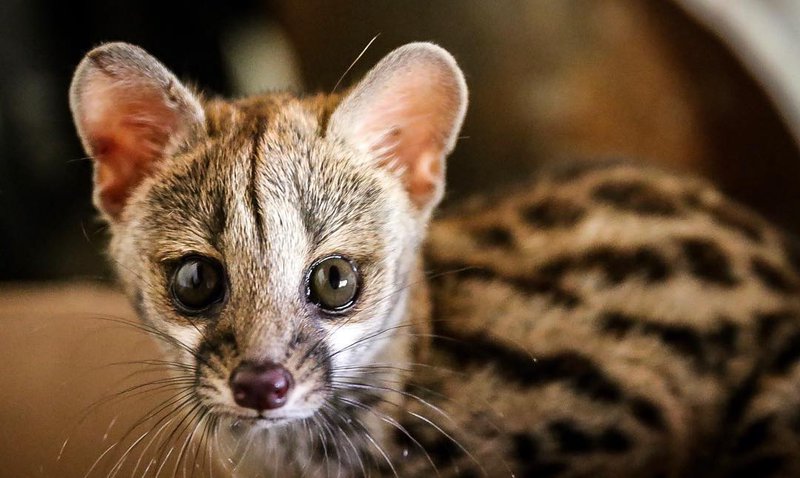 These creatures have a gestation period of about 10 weeks and give birth to a litter of two to four young. This birth usually occurs twice a year.

These creatures are usually sexually mature by two years of age.

At the beginning of their life, these creatures are typically kept in trees, rock crevices, dense vegetation.

Young are usually weaned when they are three to four months old. Shortly after, they start hunting on their own.

4. They Have Advanced Forms Of Communication By two years old, these creatures are usually marking their territory using a combination of sweat glands, urine, and feces.

These scent marks allow the creature to determine the reproductive status of other creatures.

Additionally, genets have a number of communication calls that they use.

A “hiccup” call is used by males during the mating period. Females also use this kind of call to beckon their young.

These creatures also purr and meow, similar to the sounds that domesticated cats make.

Clicks and growls are also used to communicate aggression.

5. They Can Stand On Their Hind Legs

Genets are the only viverri​​ds that can stand on their hind legs. They can sit upright and balance using their tails.

6. Their Diet Is Varied 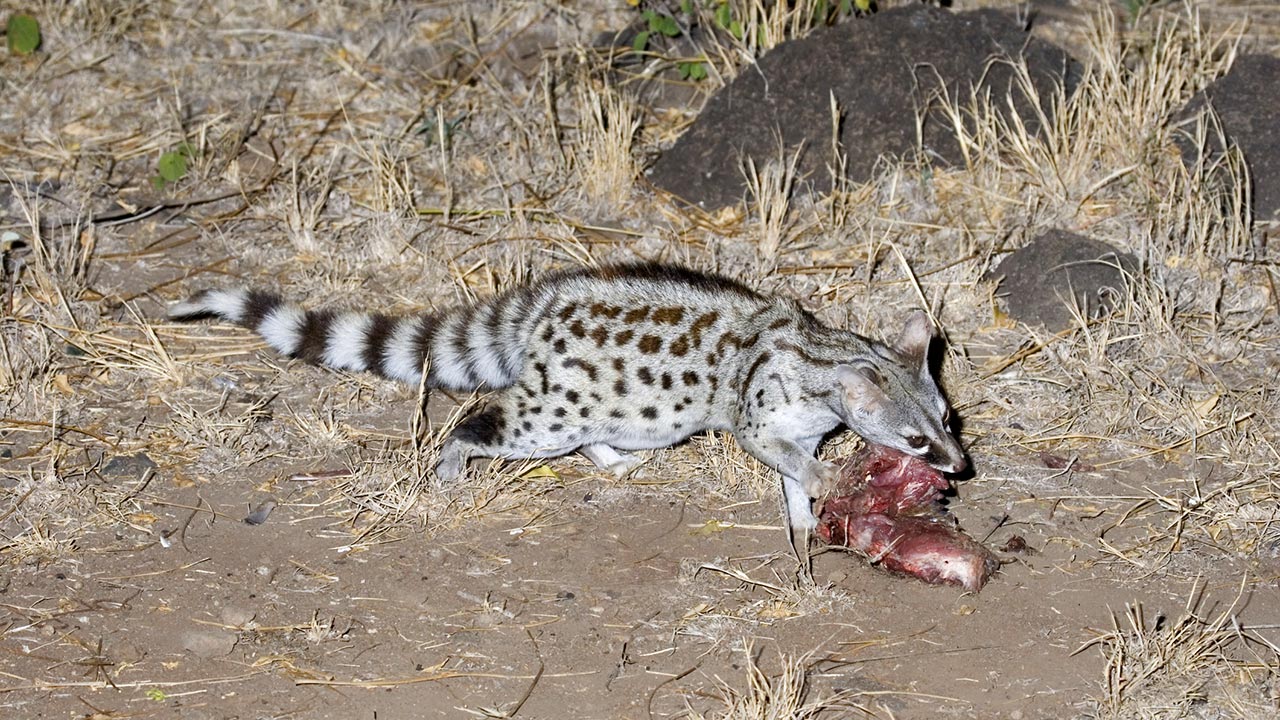 These creatures feed on many types of food, making them omnivorous.

They are known to eat everything from birds, bird eggs, rodents, reptiles, amphibians, centipedes and scorpions. Less frequently, these creatures also consume fruits, seeds, and even grass.

They are known as opportunistic feeders, which means they will eat whatever they can source. They usually stalk their prey on the ground before pouncing on it and biting it repeatedly.

7. They Can Exhibit Strange Behaviors 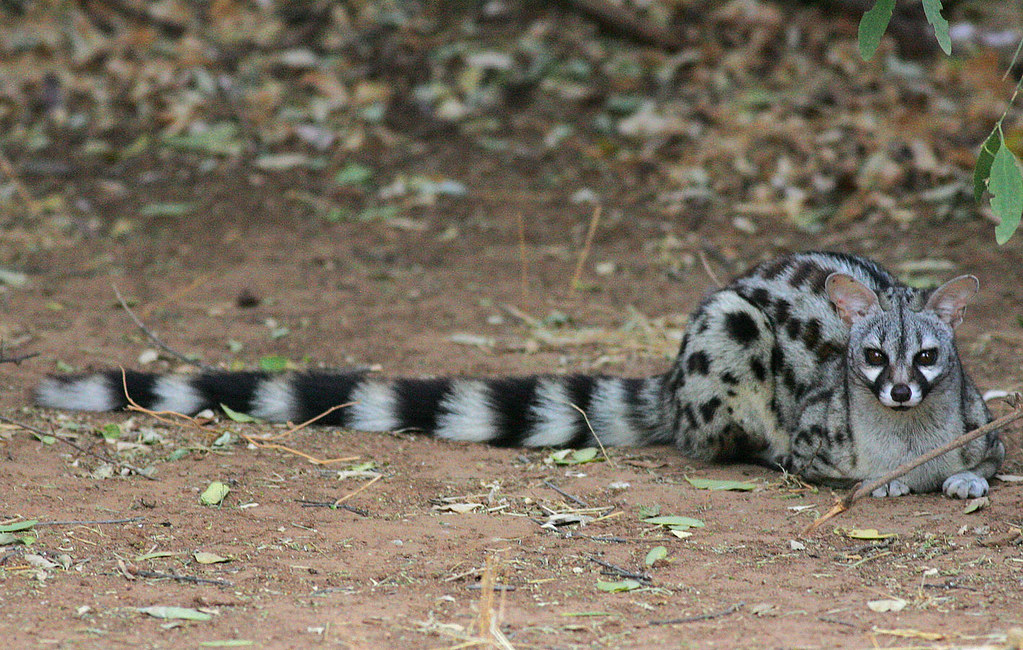 Even though they are solitary, these creatures have been noted as interacting with other animals.

For example, these creatures have been spotted riding on the back of buffalos and rhinos.

These creatures can also be very friendly and bold when around humans. For example, they are known to go right up to humans and even take their food. Sometimes they prey on leftover pet food and chickens.

This has led to some conflict in recent years between these creatures and farmers.

9. They Face Many Threats 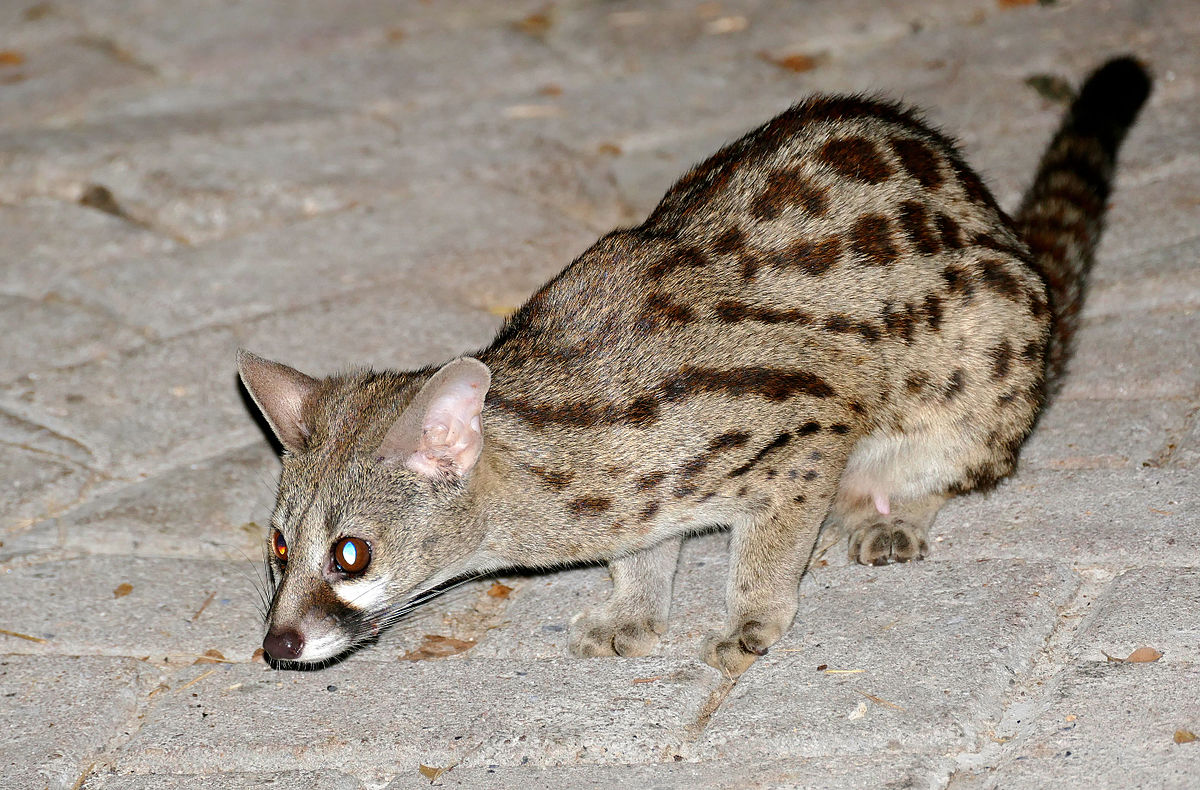 Even though these creatures are stealthy and agile, they still face many threats.

Owls, pythons, and leopards are their most common predator.

Humans also pose a considerable threat, especially when these creatures try to feed on domesticated chickens.

Several species of genets are listed as “vulnerable” or “near threatened” by the IU​​CN due to loss of habitat. Their habitats are affected by deforestation as well as land conversion stemming from human agriculture.

Some of these creatures are hunted for their meat and skin.

In spite of these threats, the majority of these creatures are listed as “least concern” by the IUCN. 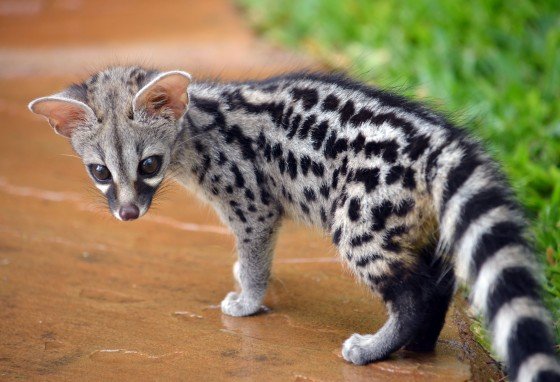 Some people keep these creatures as pets, treating them very similarly to cats.

These creatures are typically given a litter box and fed a diet similar to cats.

When they are kept as pets, these creatures can live as long as 20 years.

The Benefits Of Having Genets As Pets

On the one hand, keeping these creatures as pets can provide many benefits.

Similar to cats, these creatures are very cute and can be enjoyable to observe.

They are considered beautiful, exotic animals. Someone who desires to live in more exotic parts of the world might appreciate these traits. These animals also provide a contrast to animals like cats and dogs, as they are certainly more feral and aggressive.

They are small, making them easy to care for. They can be kept in a cage when you’re not around. Yet, they also enjoy play-time each day, which can be a very entertaining activity.

They also live for a long time, which means you can enjoy their company for many years. Some pets, on the other hand, only live for several years, making them not ideal for a child. When owning a genet, it’s likely that your child won’t have to deal with the death of a pet, which can be a traumatic experience.

These creatures will prey on most rodents and insects in their environment. Having a genet could be a way of ridding your house of these organisms.

The Drawbacks Of Having Genets As Pets

​Despite their benefits, these creatures also have a number of drawbacks.

First, they are wild animals that are originally from Africa. Keeping them as pets in a house goes against their nature and could cause them to act unnaturally or dangerously.

In the wild, they are very solitary, which shows their basic temperament. Yet, many owners try to make them into social creatures. They are not cuddly pets in the same way that dogs can be. This might be off-putting to some owners.

Since they are nocturnal creatures, they could make disturbing noise at night. This could negatively impact the peace of mind of the owner.

These creatures don’t do well with other pets. The only exception is when they are raised from a young age, as they can learn to get along with some dogs and cats. Still, integrating these creatures with other pets could lead to aggression, which would certainly not be ideal.

These creatures like to mark their territory. This can lead to foul-smelling odors in your house, which could be annoying for some sensitive owners.

Genets are also arboreal creatures, which means they like to climb. This could lead to damaged items in your household, as the animal might spot an insect and go after it.

Final Thoughts On The Future Of Genets These animals are fascinating creatures that have many unique qualities.

Their solitary nature makes them not ideal as pets. If left alone in the wild, they would likely socialize only to mate or care for their young.

Despite the fact that most species of this animal are listed as “least concern” by the IUCN, all animals in the wild are threatened now due to unsustainable human activity.

Humans are releasing greenhouse gases into the atmosphere at an unprecedented rate. Many scientists think this is contributing to global warming as well as extreme weather shifts.

When the weather is extreme, all organisms in the wild are affected.

Humans can avoid damaging the habitat of genets and other wild animals by relying on renewable resources rather than non-renewable resources. This will allow the planet to rebalance, resulting in a new age of peace and prosperity.