This species has three different subspecies, which can be categorized and understood by their unique characteristics.

The Greater Kudu as antelope species itself is one of the tallest species. They range in color, depending on the subspecies, and can fall under the grey/brown to reddish/brown spectrum. They have 6-10 white body stripes, white cheeks and white nose markings with long legs and a narrow body.

This just scratches the surface. As you’ll see in this article, there’s a lot to know and understand about this African wild animal species.

Facts on the Greater Kudu Species

Before we get into the subspecies, let’s look at the Greater Kudu species as a whole.

The Greater Kudu are attentive creatures. 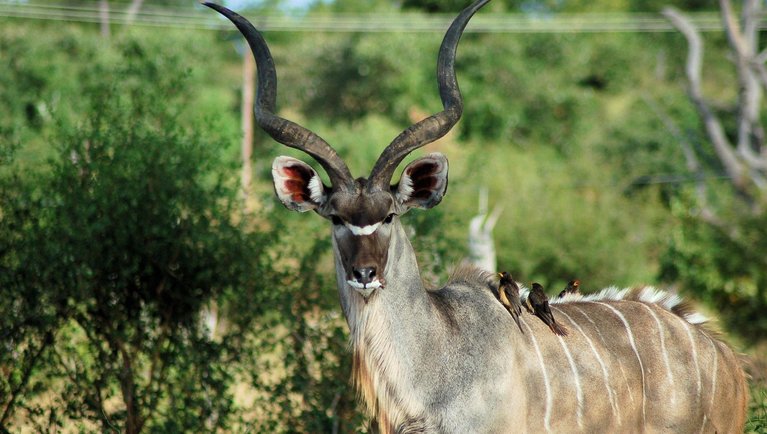 When disturbed, they will stop and listen closely to assess the situation, then react accordingly depending on what they find out. If they can, they’ll move away silently, however, if the situation causes panic, they’ll let out a sharp, loud alarm-like bark and dash away.

This bark is considered the loudest of all the antelope species. While sprinting away, they’ll keep their heads level to the ground as their horns lay backward, avoiding any potential entanglement in passing branches.

The Kudu’s fatal habit is looking back behind them only after running for a short distance. The sight and hearing of the Kudu are extremely well developed, and they are able to jump a long distance.

In fact, most Kudu species can clear a 6-foot height just from starting in a standing position. Under stress, they can clear a 9-foot barrier. In terms of socializing, calves, cows, and sub-adults will make small herds, typically up to 12 members. Adult bull Kudus will either live in bachelor clans of 2-6 members or by themselves. They will only join the female clans during the mating season.

For both bachelor and family herbs, social grooming is a common event and during the mating season, bulls will compete for female access and acceptance by clashing horns or certain displays:

Dominance is typically peaceful and quickly determined by a display where both males stand in front of each other, sideways, trying to make themselves look as large as possible.

If one kudu is impressed, the winning kudu achieved dominance.

Males who are roughly the same age and size will take on sparring contests where they’ll approach each other calmly and methodically, lock horns and begin pushing back and forth until one gives up. 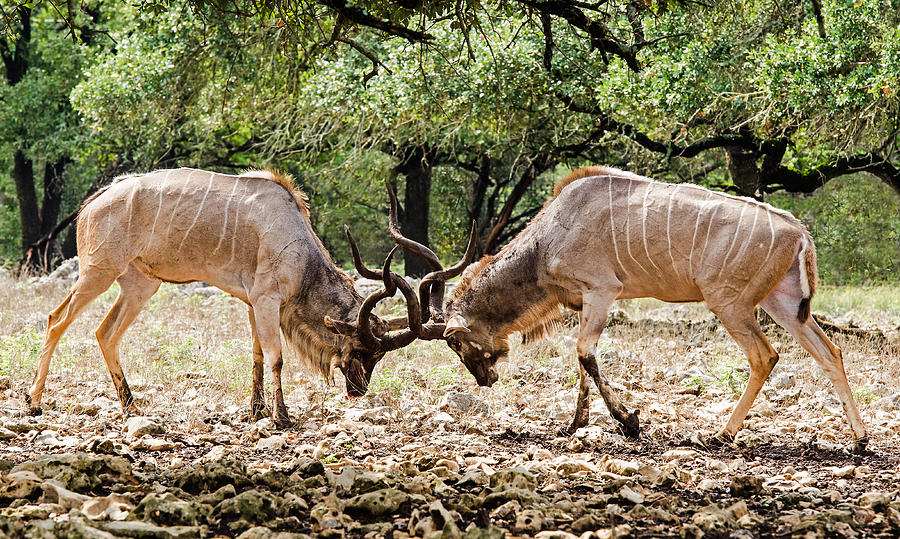 While fights are rare, and combatants hardly become injured, there have been remains found of kudus who have locked horns in a way that becomes impossible to detach.

Once the female kudus become pregnant, they will separate from the group when the time is right and give birth in dense cover or tall grass, where the calf will stay concealed for about two months.

Like most species, male Greater Kudu is a lot larger than the female Kudu and sports along hair fringe along their throat. Male Greater Kudus also have large horns with 2.5 twists, which range between 1.2 meters and begin to grow only once the male is between 6 to 12 months old.

When the males are two-years-old, their horns develop one twist and they will only achieve the 2.5 twists once they’re 6-years-old. Males also tend to be a lot louder and more vocal than the female Kudus as they frequently use gasps, low grunts, humming and clicking noises in order to communicate. 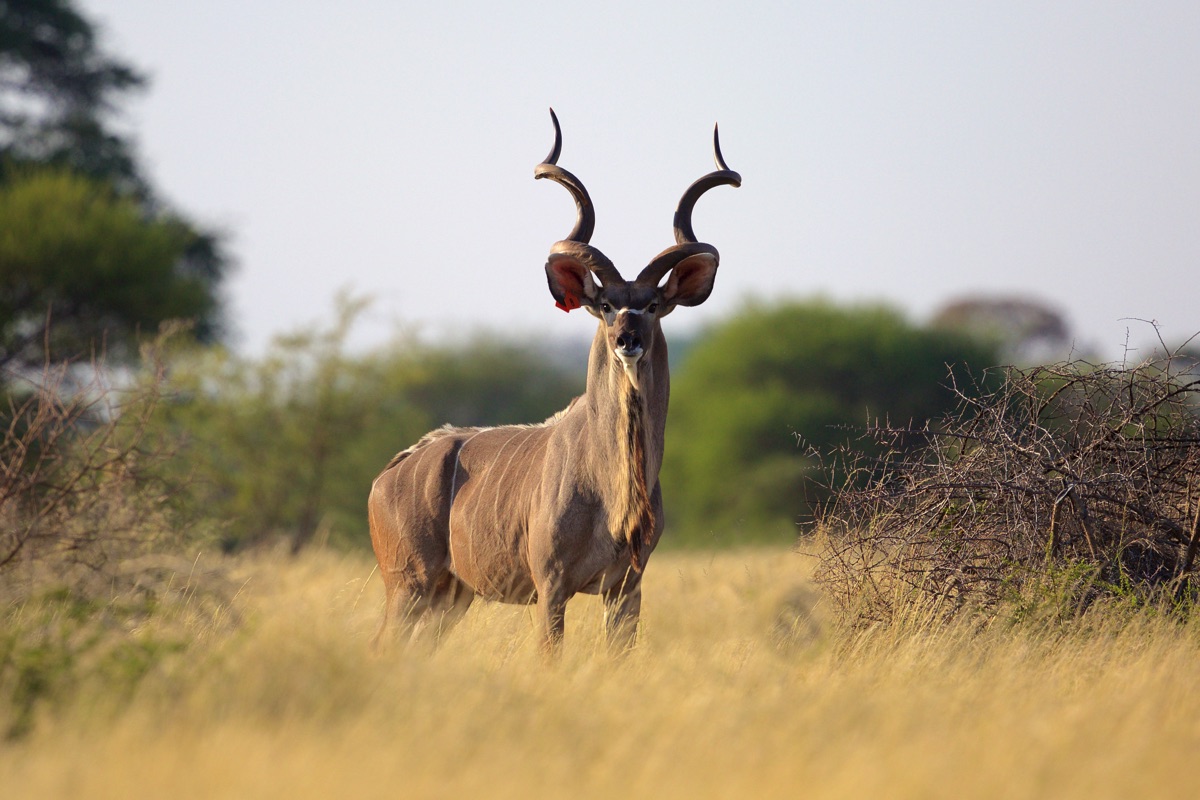 This species is found in plains, covered by brush, rocky hillsides, and woodlands in southern and eastern Africa.

Female Kudus and their young will live in herds including 5 or 6 other members. At times, two separate groups of females will come together to create a larger herd, however, this is only a temporary setup.

Male Kudus, on the other hand, travel in bachelor herds consisting of 2 to 10 members. These groups don’t overlap, but the range of a bachelor herd can overlap a couple female herds. 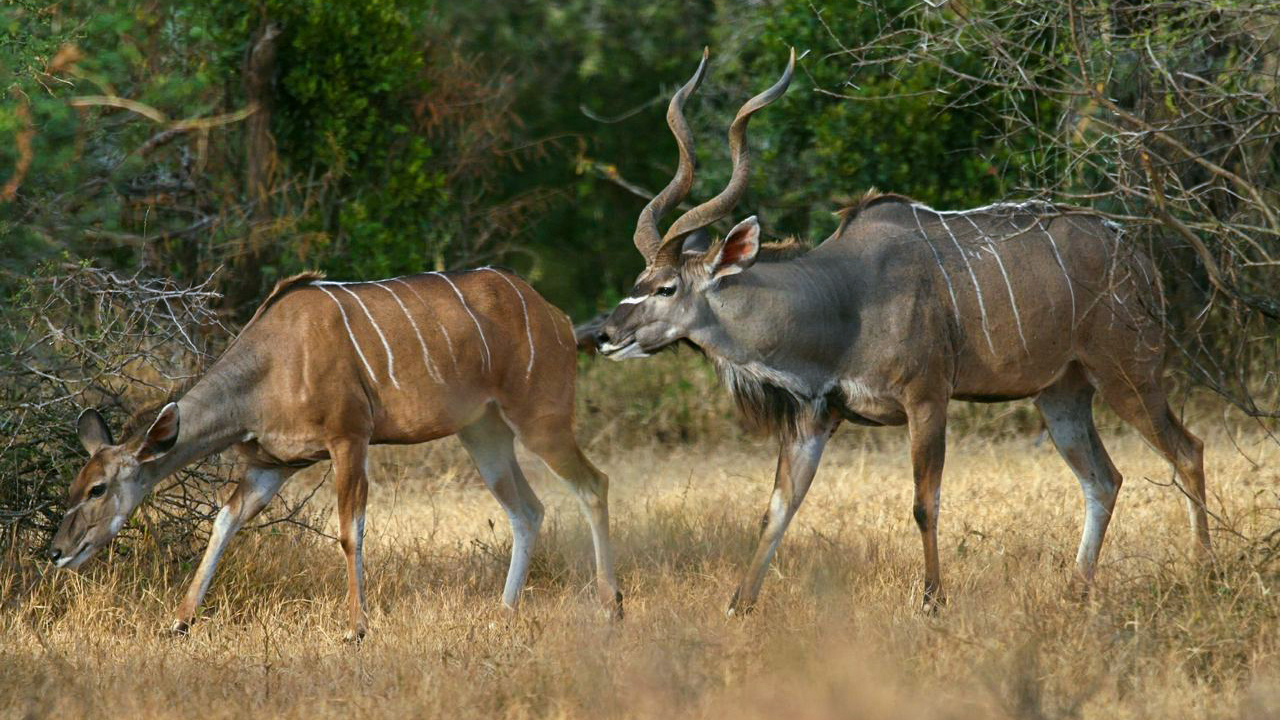 The Greater Kudu breed at the end of each rainy season, but this may vary depending on the location. After roughly 240 days or a gestation period, one calf, or sometimes two, are born.

During the calf’s initial two weeks, it tends to spend the majority of its time hidden away from predators with its mother in tall grasses or in a covered, dense area. However, throughout the next 4 to 5 weeks, it enjoys gallivanting with the herd during the day.

Females reach their sexual maturity at 3 years old while males will reach their peak at 5.

Greater Kudu have many different predators.

These include leopards, lions, cheetahs, African wild dogs and of course, humans.

Now that we’ve covered the basics of this interesting African creature, it’s time to look at its three subspecies.

While there are only a few differences between each subspecies, each one is unique in its own way.

Let’s check out these subtle yet unique differences. This subspecies is tall and quite majestic, carrying the most incredible set of horns, which is why it’s also one of Africa’s most popular and desired “trophies”.

This Greater Kudu is one of the most handsome species in Africa.

Aptly nicknames the “gray ghost” by Ernest Hemingway, Kudu subspecies has a grey to greyish brown short coat. The bulls become greyer as they age while their necks grow darker throughout the breeding season.

Both male and female sport straight, short, standing manes that go from the top of their shoulders to their head, then transforms into a crest and carries itself down the spine.

These species have a white marking which extends from their eyes across to their nose. They also have extremely large, pink ears.

Lastly, this type of Kudu has white patches on the side of the face and the top of the chin and upper lip. There’s also a flash of white under their black-tipped tail.

This subspecies is found in Tanzania, southern and northern Kenya, northeastern Uganda and southeastern Sudan. This Kudu species has a bright color than their southern relatives and have more conspicuous, transverse stripes.

In terms of other characteristics, the east African Greater Kudu shares many similar characteristics with the South African. Only slight appearance differences and preferred habitat are what differentiates the two relatives.

Southern-based Greater Kudu enjoys living in acacia and bush on lowlands as well as scrub woodland, hills, and mountains. They enjoy a broken country where they have access to water and sufficient cover of woodland.

This subspecies is the palest and smallest out of the group and carries the smallest horns as well. Typically, this type of Kudu is found in the northeastern Central African Republic and parts of far western Sudan as well as southeastern Chad.

This Kudu subspecies is known for their 4-5 vertical, white stripes on each side of their bodies.

Final Facts on the Greater Kudu

This is the second largest species of antelope in the entire world, the largest being the eland.

Despite their large, bulky size, these magnificent beasts are surprisingly agile and well-equipped at jumping, being able to clear tall barriers.

They’re well represented in national parks such as the Kruger National Park and Baviansklood Protected Area, which are parts of the World Heritage Site.

This magnificent creature is truly a treasure to observe in real life and should be protected and appreciated as any other living creature in Africa.