There’s something liberating about watching animals roam free on the open plains. It doesn’t matter which continent, there’s something there running, unburdened and free, that resonates with us. They provide inspiration in one form or another, even if the inspiration is something small. Horses, buffalo, and, of course, antelope all represent that freer aspect of ourselves.

Being an audience member can be as fulfilling as the thing itself. It may be vicarious, and perhaps not an especially deep concept, but it still brings us joy.

The sable antelope is one of those animals that can provide experiences like that. They’re handsome, majestic creatures that are but a single cog in the African ecosystem, but regardless maintain a pivotal role in the circle of life.

What is the Sable Antelope?

The sable antelope is, well, an antelope. They’re easily identifiable by their large, impressive horns, used as a defensive measure against predators or other sable antelopes. There’s some sexual dimorphism between the sexes, with the males being larger than their female counterparts. 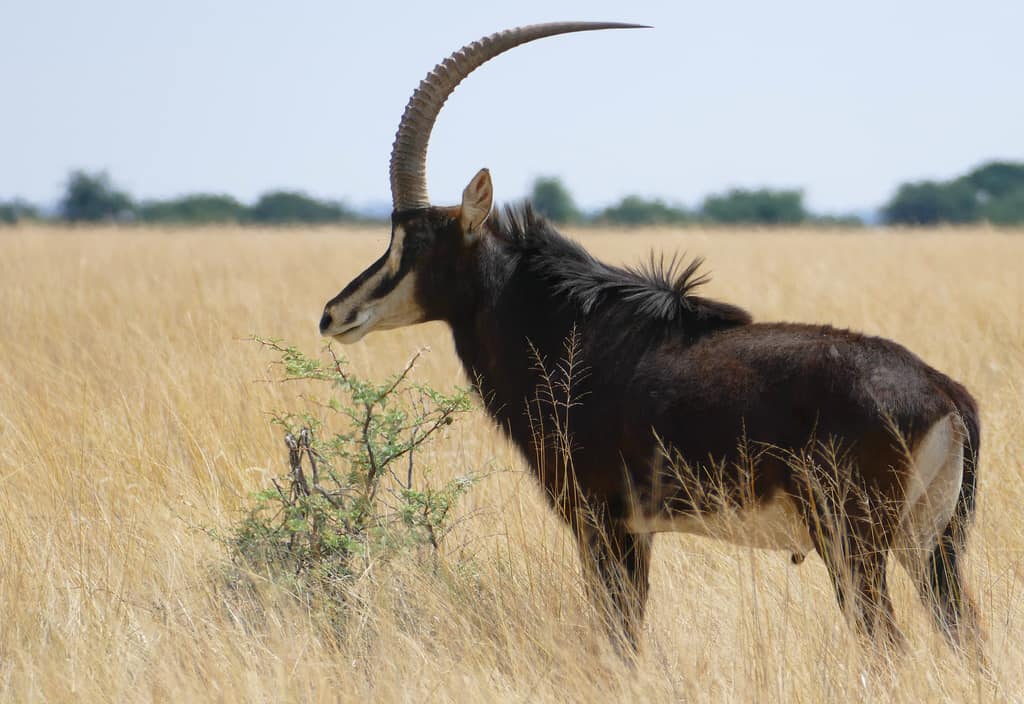 Aside from their trademark horn design, they have thick necks and powerful bodies, with an upright mane that stretches down their neck along the spine. Their coats are generally dark, similar to a chestnut color. Their faces are white with a large dark stripe down the nose.

By and large, they’re impressive creatures to see on a safari, especially the design of their horns. While some horns may come off as more ceremonial than practical, there’s no mistaking the express purpose these extensions provide.

Where to Find the Sable Antelope?

You’ll probably want to start in Africa first, that’s where they’re native to. Sable antelope are not a particularly widespread species, centralized in a more south-eastern pocket of the continent. They can be found in East Africa, just south of Kenya, as well as in Angola and in Southern Africa.

When touring these areas, they’ll be found in the savanna regions. They’re fond of a type of terrain known as a miombo, which is a mixture of grassland and bush. The wider, more open grasslands, as it turns out, are not what they prefer to live in.

Savannas are abundant in precisely the type of food sable antelope are interested in: medium to high grasses. They will take the time to feed on available leaves in the area a well, generally fire-resistant deciduous trees. These feeding grounds, which are their favored during the rainy season, change once the dry season comes around.

The dry season brings with it fires that burn down a sustainable amount of the present trees and wild grasses. This paves the way for new life to resurge, refreshing the landscape. Once the fires have calmed down, the sable antelope will find its way to previous floodplains to graze the new available plant life found there.

As sable antelope are water-dependent, they will often settle near large bodies of water, whether they be lakes, streams, or rivers, to maintain a healthy, daily water supply. As these bodies of water must also have an available field of available, tall grasses, this puts them in competition with humans. This desirable ground results in territorial encroachment on the sable antelope, shrinking the availability of viable habitats.

How the Sable Antelope Live

As with most animals similar to the sable antelope, they mostly live in herds with up to thirty members each. These herds are comprised of females and young antelopes not yet ready to venture out into the world, all of which are lead by one dominant male bull. Due to these herd being lead by a singular bull, eligible males who may attempt to take over control of the herd are exiled before they’re able to try. This usually happens once a male reaches three years of age, while they’re still juveniles but mature enough to survive on their own.

Females, on the other hand, once they come of age will remain with the original herd they were born in. Once herds get too large, they will splinter into smaller herds composed of females and their young. These new splinter herds will then find new bulls, usually from bachelor herds, to form a new herd.

Occasionally there will be disputes over who will lead new herds, but those often end without serious harm to either bull. Intruding males, while not necessarily be looking to take over the herd, will also infringe on their territory on occasion. These males are met with similar resistance until repelled.

Sable antelope territories are fairly large, due to their migratory nature, spreading from 4 to 19 square miles. The thing about many antelope species is that they might appear to be runners. That is to say, at the first sight of danger they’d prefer to run than fight. Perhaps this is derived from many of our own experiences with wild fauna, like deer, that avoid fights at every moment. Skittish, you’d call them.

That’s not the case when it comes to the sable antelope, with either sex. Like all animals of similar make and origin, the male sable antelope proudly sports long, scimitar-esque horns from its skull. The females have horns of their own, but much shorter. While handily being among the most handsome adornments these creatures possess, they’re not just for show.

When predators stalk a herd of sable antelope, they’re not looking to take down the bull or even the females. Their targets are going the be the young – the calves and the yearlings. They’re smaller, weaker, and won’t put up much of a fight if they’re cornered. The adults, on the other hand, are a different story.

If a predator messes up and ends up in a fight with the bull of the herd, or even one of the females, there is a probable outcome that the predator will end up being killed. This is due to the build of a sable antelope and their aggression in a defensive fight. Sable antelope are known for being powerful creatures. They’re stocky, with a robust build and a pair of horns that are natural weapons.

When it comes to hierarchies within the herds, the bull is always at top. From there, the females have their own hierarchy system, based on dominance and seniority within the groups, that dictate their standing. The children, yearlings and calves, are at the bottom and end up following the herd.

Predators of the Sable Antelope

It’s fairly common, due to their age, for sable antelope young to lag behind the rest of the herd. These make prime targets for predators, especially if adult sable antelopes aren’t able to defend them in time. These predators commonly include lions, hyenas, wild dogs, and leopards. In miambo terrain, most of their predators aren’t commonly encountered. Lions, hyenas, and wild dogs only sparsely hunt them. Leopards are their primary predators, but even so the miambo terrain doesn’t see them very frequently. The scarcity of predators, as well as the plentiful supply of dietary food sources, are likely the reason why sable antelope don’t prefer wandering into expansive plains. Sable antelopes are powerful, gregarious herbivores that aren’t afraid to put up a fight with predators. They’re territorial, forming herds that eventually split off to form new herds lead by bulls from wandering bachelor herds. Their habitats switch between miambo terrain and grasslands, depending on which season it is. As long as there’s a good supply of tall grasses and a dependable water source nearby, they’re happy.

The sable antelope is, thankfully, presently listed on the IUCN list as Least Concern, so there’s no worry of this specimen disappearing soon. However, one of the subspecies of sable antelope, the giant sable antelope, is currently Critically Endangered, and efforts are being made to preserve its existence on this good green Earth.