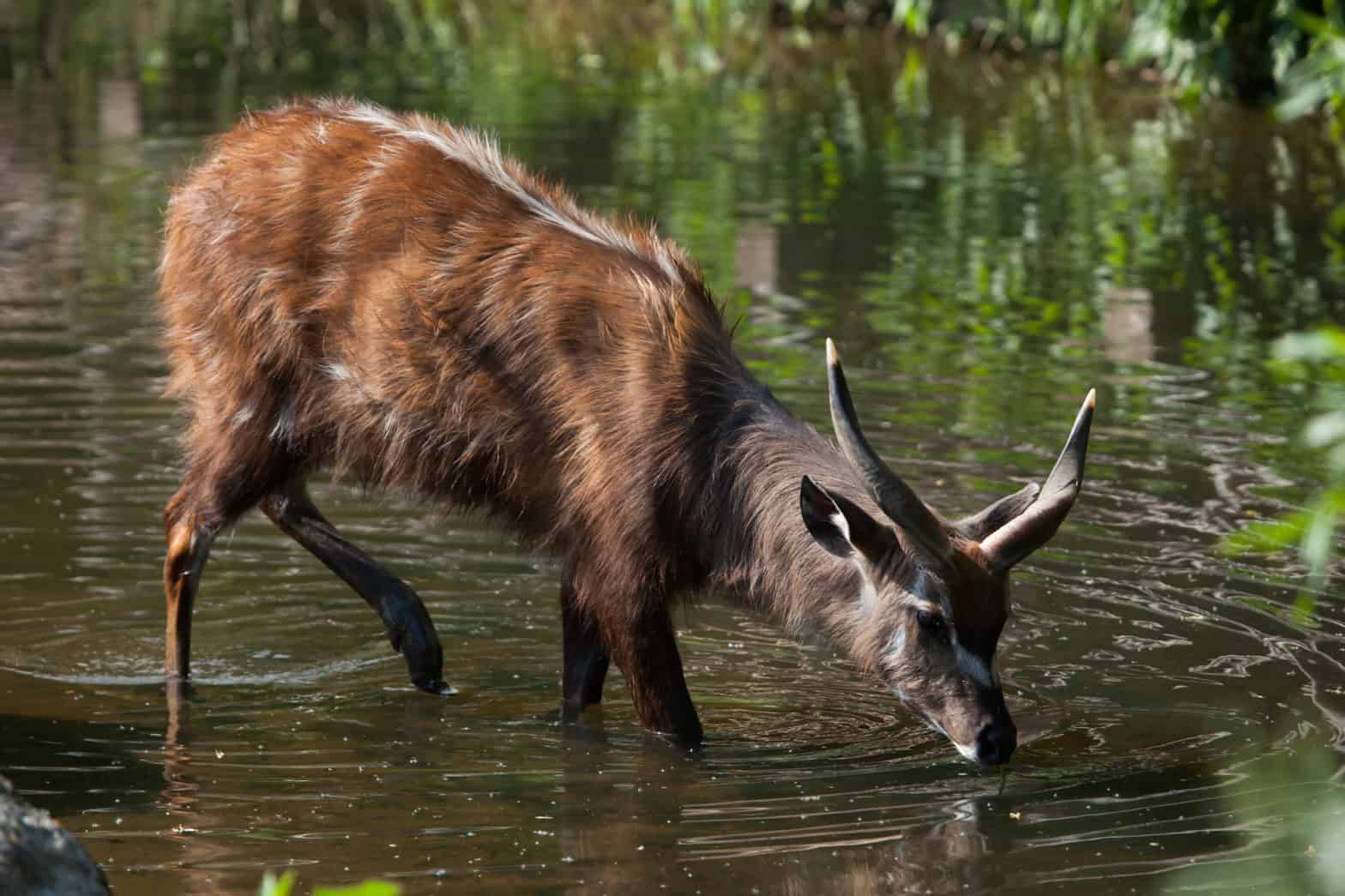 There are over 70 species of antelope in Africa, but none is more unique than the sitatunga. This animal, which is mostly found in central Africa, does not roam the dry savannah-like many of its relatives. Instead, it lives most of its life in the rainforests and marshes of the continent. Its preference for this type of environment makes it Africa’s only aquatic species of antelope. The habits and life cycle of this animal are quite unique, and learning about its place in the African ecosystem may assist with conservation efforts both now and in the future.

What Is a Sitatunga?

The sitatunga is sometimes called a marshbuck, but it is not a deer. It belongs to the antelope family and is well adapted to life in the swampy marshes it calls home. It is typically heavier than its savannah relative, and males can weigh as much as 260 pounds while being around 40 inches tall at the shoulder. Females are not as large, standing around 30 inches at the shoulder and weighing from 50 to 120 pounds.

Sitatungas have long front legs and splayed hooves, which prevent them from sinking in deep mud as they browse the marshlands. Their dense coats are slightly shaggy and repel water from the heavy rains that sometimes occur in their habitat. A sitatunga’s hindquarters sit higher than the shoulders, which makes the animal appear hunched forward.

As males of the species mature, they grow spiral-shaped horns. Both males and females have white markings on their coats, especially along the spine. Their coat color ranges from brown to rust, and markings vary from animal to animal.

Sitatunga is unique to Africa and is the only antelope that live in an aquatic environment. They are shy creatures that prefer to spend their days in isolated areas to evade predators, hiding in reeds and papyrus plants. Because they live in and near water, these antelope do not face the same hardships that those which live on land do. Food and moisture are in ample supply, and since sitatungas do not forage in huge herds, the land can support these animals more easily, whether they occupy a temporary floodplain or permanent marsh.

Large numbers of sitatungas can be found in Western and Central Africa, in rainforest and swampland areas. Herds range over the Okavango Delta during the rainy season, throughout the Congo and in permanent marshes, where the species thrives. The herds create well-traveled paths within swampy forests and marshland foliage, which also provides them shelter and concealment from predators.

These antelopes are excellent swimmers and often travel through deep water to reach small, dry islands on which to rest or browse. They create beds by trampling the grass down, which makes for a comfortable resting area during the hottest part of the day. They may also use these islands to hide newborn calves until the young are strong enough to follow the mother in her foraging.

While some species of antelope are known for crossing vast miles of Savannah in migration, sitatungas are mostly sedentary. And they do not roam over wide areas of land. Because their habitat is so dense with trees and water, they move slowly and can spend hours foraging in one spot. This is either on a dry island or in the water. While they may venture onto dry land to browse at the edge of a nearby forest, they are typically not comfortable walking on land because of their splayed hooves.

The sitatunga’s habitat supplies it with plenty of food that ranges from grass to marsh leaves and rushes as well as tree bark and the occasional piece of fruit. Although those that live in the Okavango Delta are more likely to have access to this kind of food. Sitatungas forage during the day and well into the night. Where they may wander away from the marshes and into nearby forests to find fresh grass. Sitatunga is ruminating, which means they spend a large part of the day chewing their cud after feeding. Calves are usually left behind in a sheltered hiding spot until they are about a month old. As they make easy prey for the habitat’s large, nocturnal predators such as leopards, hyenas, and wild dogs.

A female sitatunga is ready to breed when she is a year to two years old. And males come into maturity when they are around two as well. Females may come together to forage in small groups, but large herds are generally uncommon. There is no specified breeding period, as females are prepared to accept a mate all year round. Once mating occurs and a female becomes impregnated, she will give birth about eight months later. Sitatunga does not mate for life and one female may have many partners over the course of her lifetime.

Calves are born in hidden locations within marshy swampland, where their mother conceals them on small grass or bulrush mats. They remain there for at least a month, and the mother antelopes return several times a day to nurse them. Calves follow their mother out into the swamps once they are large enough and continue to suckle for at least six months. However, parental ties do not continue once a calf learns to forage on its own. And it may leave its mother or the small group soon after. There are no set territories. And a calf may wander far off from where it was born once it comes of age.

The chances of survival for a sitatunga calf are slightly higher than antelope that live on the savannah because of their habitat. The ability to hide during the most vulnerable time of their life vastly increases the chances of surviving to adulthood. Sitatunga can live up to 19 years in captivity but have an expected lifespan of 12–15 years in the wild.

Sitatungas are not as fleet as other antelope species because of their raised hindquarters. However, they do have other methods of escaping predators. When they sense danger, a sitatunga will flee into the swamps and into deep water, where they swim away. If the danger is extreme, they may even hide underwater with only their nostrils breaking the surface. However, the danger is present in the water as well, as crocodiles, pythons and other large snakes all prey on the sitatunga.

The greatest present threat to the sitatunga population is a man. The antelope is hunted for its meat and for sport. And the males are prized for their horns, which are tipped with ivory. Locals who hunt sitatungas for their meat track the animals through the paths they make and set traps. Once they trap a specimen, it is either taken to land to be speared or is shot from a boat.

Much of the lands where the sitatunga roams are protected. However, poaching is still common, and it is affecting their numbers. The trophy trade is especially brisk is Botswana. Populations are shrinking in the western sector, and the species has become extinct in Ghana, Togo, and Niger. The Okavango Delta population is well protected by the African government. As large parts of this area include a game reserve. While tourists navigate the delta’s waters, hunting is forbidden. It is currently unknown whether future water projects might threaten the sitatunga in this area.

Though the sitatunga is not yet endangered, conservationists are concerned about the species vanishing from certain areas. This is where they were once plentiful. While hunting and poaching are affecting the antelopes’ numbers, a larger threat is human encroachment. Swamps and marshes are being drained to make way for roads and farmland. And rainforests are razed to create grazing land for the local cattle population. This destroys the sitatunga’s habitat and food supply, which may mean fewer calves are born each season. While some national parks introduce captive breeding programs, still they threatened the population in the wild.

The sitatunga is currently considered as being in the least danger for extinction; however, because they live in such unusual conditions, it is difficult to track their numbers. Some conservationists believe that there may be populations that have not been discovered. But despite this, the overall population of sitatunga in Africa seems to be shrinking each year.

What Can You Do?

If you want to become involved in saving the sitatunga, there are several ways you can join the conservation effort. Considering donating money to wildlife parks that shelter the antelope or by joining groups such as the African Wildlife Foundation. Be outspoken about the trophy and illegal bushmeat and ivory trade. And, encourage friends and family to be cautious about where they buy African souvenirs.

The Future of the Sitatunga

The future of Africa’s aquatic antelope may be in peril if its habitat is not protected. Sheltering populations in national parks and breeding programs in zoos all over the world may help bolster this animal’s numbers. But conservation efforts must include wild populations if the sitatunga is to survive.Featured image via Depositphotos