Animals adapt – it’s something that all animals do, from mammals to the fish in the sea. Even humans adapt. Warthogs have done some interesting things to adapt their lives.

What Is a Warthog?

Before learning how warthogs have adapted (and why), it helps to understand what the warthog is. You’ve probably only seen them in the zoo and as Pumbaa in The Lion King. But there is more to this mammal than meets the eye.

One of the things that makes warthogs distinct from domestic hogs is their face, as they have a flat head that is large and looks like it’s covered in warts (they are bumps that protect their faces when they get into fights with other warthogs – and they are something that grows more prominent with age). Sparse hair on the bodies make them look funny, and they also have four tusks. Those four tusks make warthogs look pretty ferocious, and you can be sure that they can protect themselves when needed. However, they are grazers, and they prefer to spend their time eating plants and grass, even rooting around in the dirt with their noses to get the bulbs and roots of the plants they eat.

They run really fast when they are frightened and need to get away. They can actually run up to 30 miles per hour (the average human only runs around 27-28 miles per hour).

Like other pigs, warthogs have an affinity for wallowing in mud (it’s the cooling effects of the water they’re looking for. The mud also helps keep the insects off of them. They also have all sorts of species of bug-eating birds you can find riding around on them, munching on pesky insects. 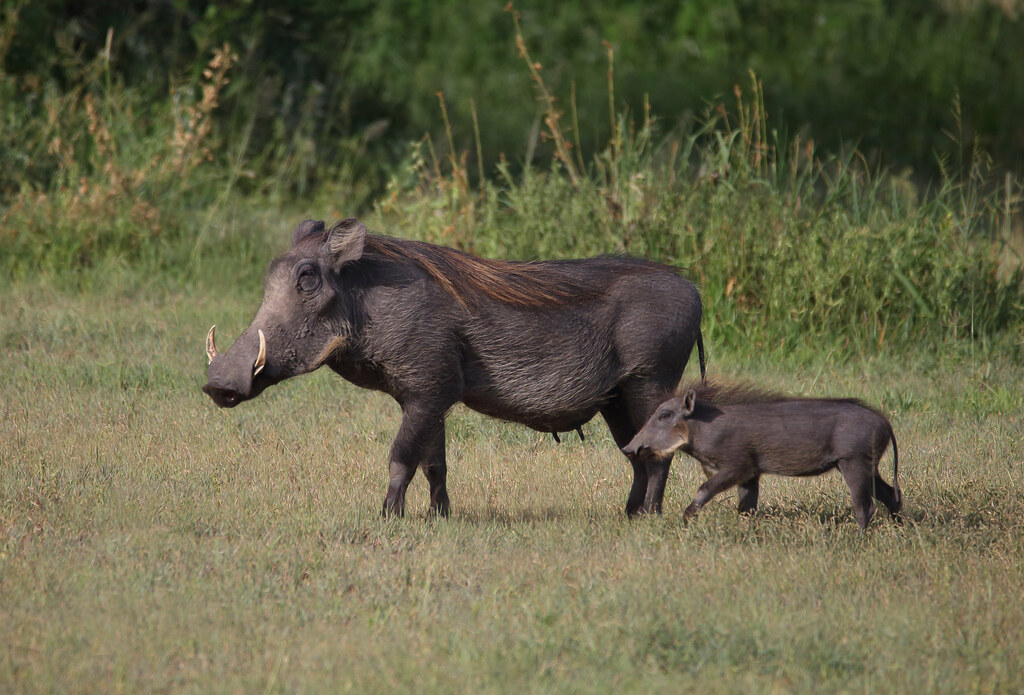 Because warthogs are adaptable, they can live in different habitats and still thrive. In the wild, warthogs are found living in grassland area, woodland areas, and in the savanna. They are found all over Africa, including Ethiopia and Kenya.

Warthogs hide out in dens to stay safe and to have young (and care for the little ones, which won’t be weaned for about four months). They don’t usually dig their own dens, opting to hang out in abandoned aardvark dens, in hollows under rocks, or in available caves. If they find an occupied space, they’ll just go look for a new one.

They back into their hidden holes, leaving their tusks aimed toward the entrance to help guard from predators. Since they are more of a flight animal than a fighter, if someone really wanted that spot they’d probably just leave. When they have young, the babies go in first.

How and Why Warthogs Have Adapted

Living in the deserts of Africa, among other areas, poses some issues for the mammals that live there. In order to stay where they are, warthogs have learned to adapt to different environments. Here are some of the adaptations of warthogs, and why they adapted.

1. They Can Go With No Water for Long Periods 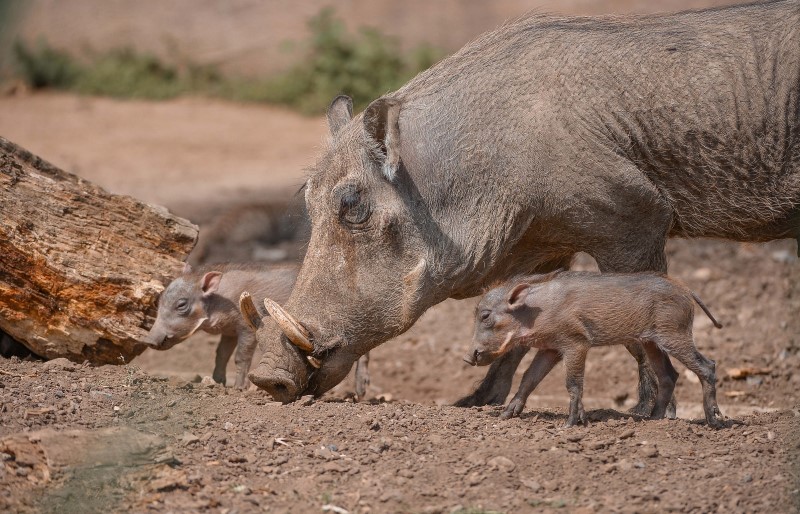 Warthogs live in the desert, or some of them do anyway. Due to this “lifestyle,” they have adapted to going without water for long periods of time. In fact, they can go up to several months without water during dry seasons (and they don’t have reserves like camels do).

When they do find water, they like to get right in it. While warthogs aren’t really territorial, they can have spats with “rival” warthog groups (called sounders) over things like food and water).

2. They Have Excellent Hearing and Smell 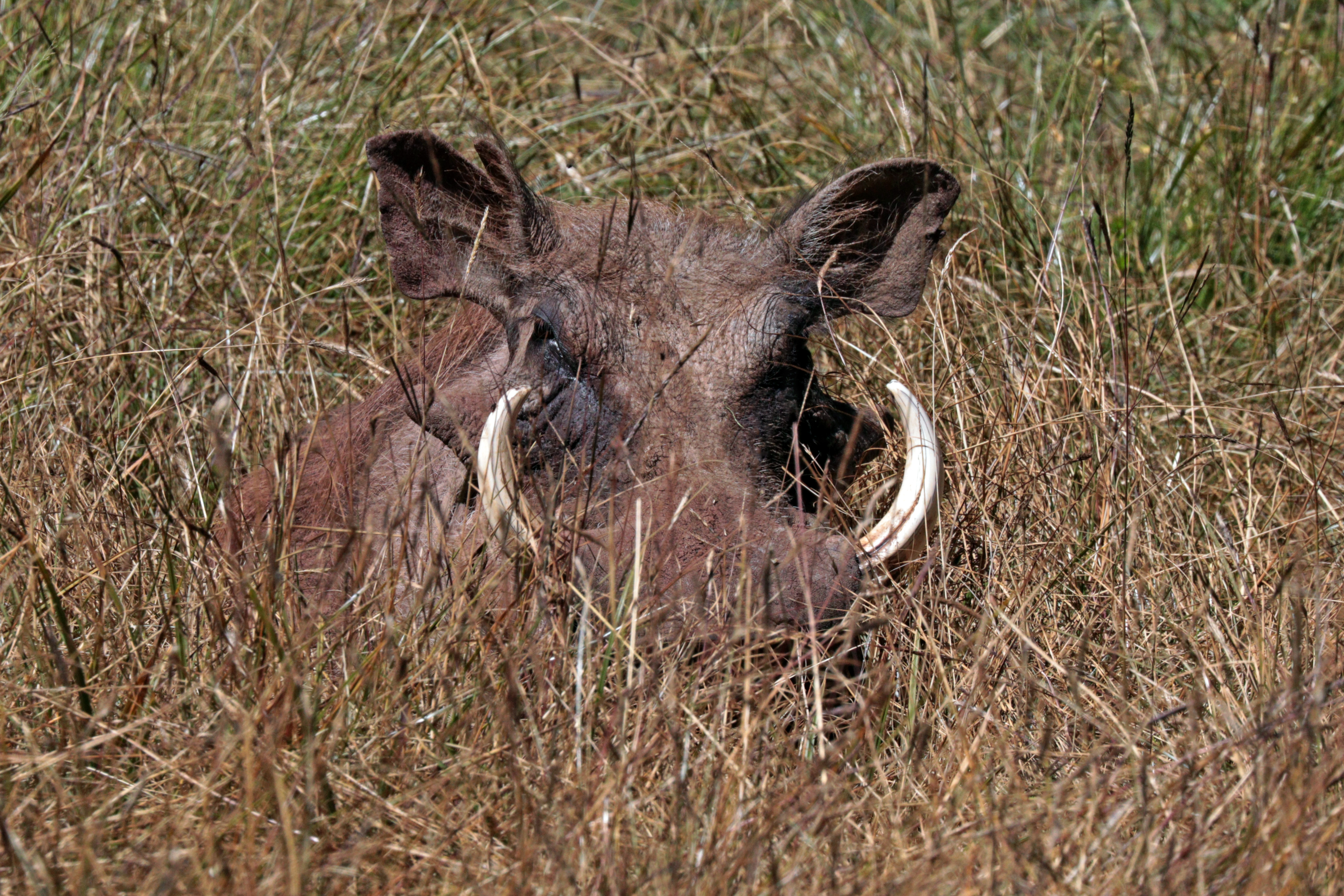 Warthogs have developed an excellent sense of hearing. Because they are such fearful mammals they need to be able to hear when a predator is common, so they’ve developed the ability to be warned by sound. Being able to hear a predator in time to get away is a life saver – plus the fact that they can run pretty fast for such a stocky bodied animal.

Those huge flat noses do something good for them as well. They have a heightened sense of smell, which helps with foraging for food and knowing when a predator is around.

3. They Have Thin Hair for a Reason 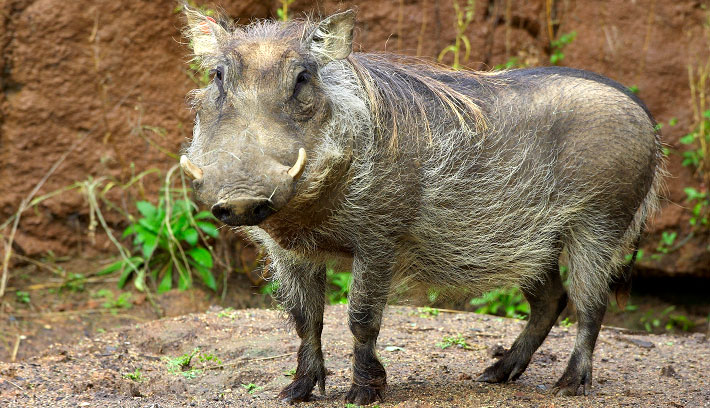 While warthogs may look funny with mostly bare skin and random tufts of fur, this is another adaptation that allows them to live comfortably in hot conditions. The lack of hair allows body heat to escape from them faster, which lets them keep from overheating.

Unfortunately, on the unlucky side of things, that lack of fur makes their skin more susceptible to the sun and heat (which is why they like to roll around in the mud and live in dens in the ground).

4. Their Eyes Are Not On the front, But On the Sides

5. They Are “Pack” Animals that Prefer the Daylight 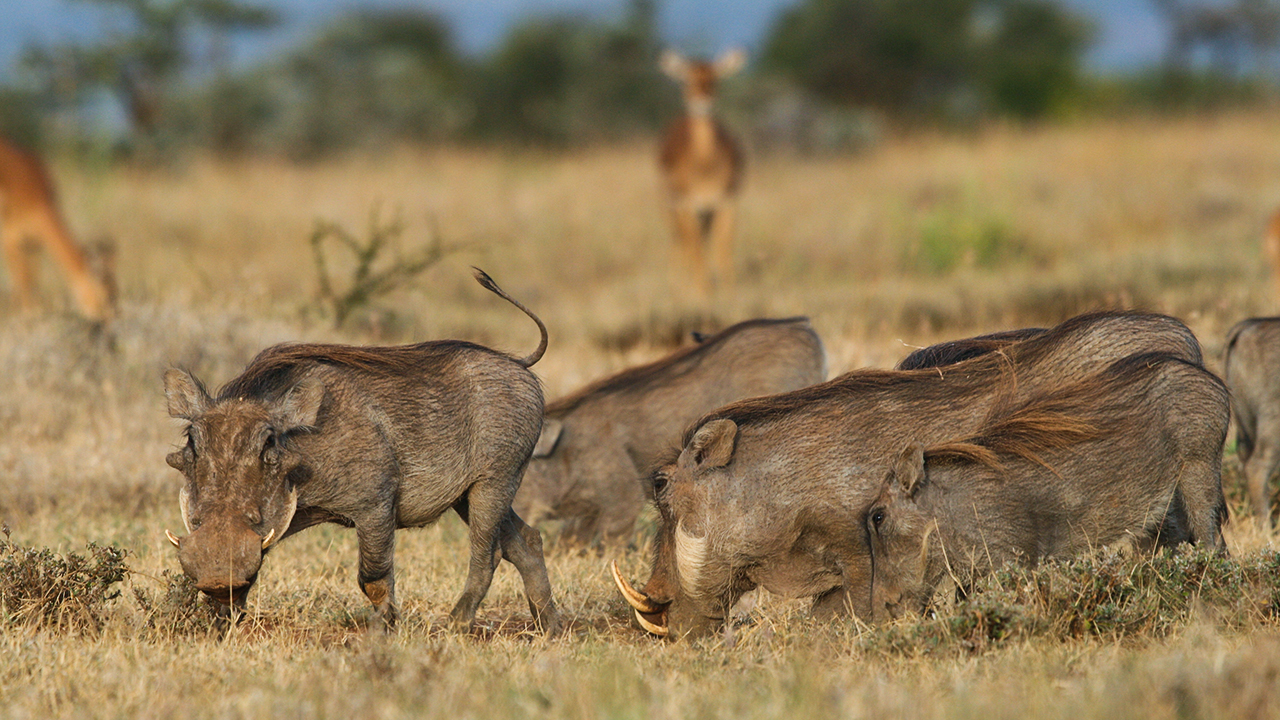 Sounders of warthogs are usually a group of 6 to 18 hogs, ranging in ages. They consist of one, but sometimes two, females and their young. These groups forage together, spend time rubbing up on one another, and will even socially groom each other

Sometimes there are adults males in the group, but they tend to stay solitary. Males only stay in the group until they are around 15 months of age when they move on to make their own families.

Warthogs forage in the daytime and bed down in their dens midday and evening.

6. They’ve Learned to Communicate with One Another 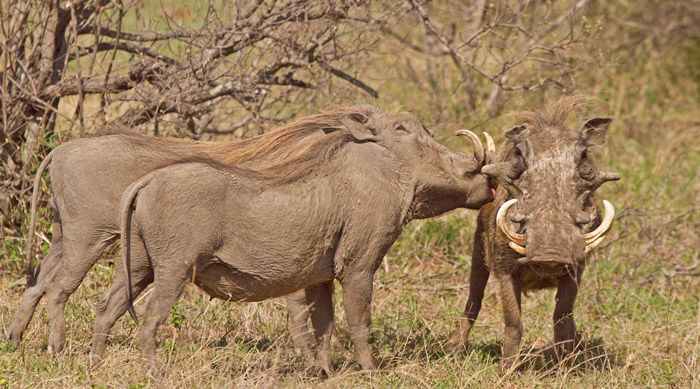 Like many other animals, warthogs have learned to communicate both directly and indirectly with one another. Their direct ways of communicating with one another include grunting, growling, squealing, and snorting – all used to greet, warn, and submit. They will raise their tail up when they are in danger, a sign to the rest of the group that there’s trouble.

Indirectly, warthogs leave messages to other groups of hogs (and males to other male hogs) in much the same way as dogs. Warthogs will mark their territory using secretions for the glands around their eyes and saliva, instead of urinating like dogs. These markings help protect things like watering holes.

7. They Bed Down Conveniently

The reason why warthogs choose to bed down in “homes” that are already there is that it takes no energy from them but to enter and lay down. The reason they stay in caves or underground is that it stays at a constant cool temperature, keeping them safe and cool.

They keep their dens clean too. All members of the group will drop their dung in the very same place. This confuses predators as too how many hogs are part of the group, or so it is believed.

8. Their Tusks Are for More than Show

Warthogs use their tusks, which are canine teeth that never stop growing, to defend themselves when they need to. They can inflict serious wounds on other hogs and on predators when the warthog didn’t get a chance to run.

Warthogs are not endangered, but they do have many predators (including humans). Main animals that hunt warthogs include cheetahs, lions, and leopards.

They are also hunted for sport, and people hunt them for food too. But, be careful, Warthogs carry swine fever – which is transferable to domestic livestock.