If you think your mutt of a dog is hard to train, you haven’t been introduced to the African wild dog yet. The wild dog of Africa is also referred to as painted dog or Cape hunting dog. If you find yourself in the open plains and woodlands of sub-Saharan Africa, you could potentially catch sight of one of these spotted wild hounds.

But how will you know if you’ve seen a wild dog?

They have long legs, big ears, four toes and are most commonly recognized for their patched coat of black, red, yellow, white and brown fur.

What’s interesting is every dog has its own personalized coat pattern, unique to them. While a pack of dogs in the wild seems risky for the health and wellbeing of the dogs themselves, these hounds are far from innocent or vulnerable.

If you happen to come across one of these packs while roaming around, lost in African plains, you’ll want to find the nearest tree to climb… quickly. However, despite being feisty, dangerous creatures, as with anything in the wild, they have their fair share of predators as well.

In this article, we’ll discuss these predators and how the wild dog protects itself in the individual cases. 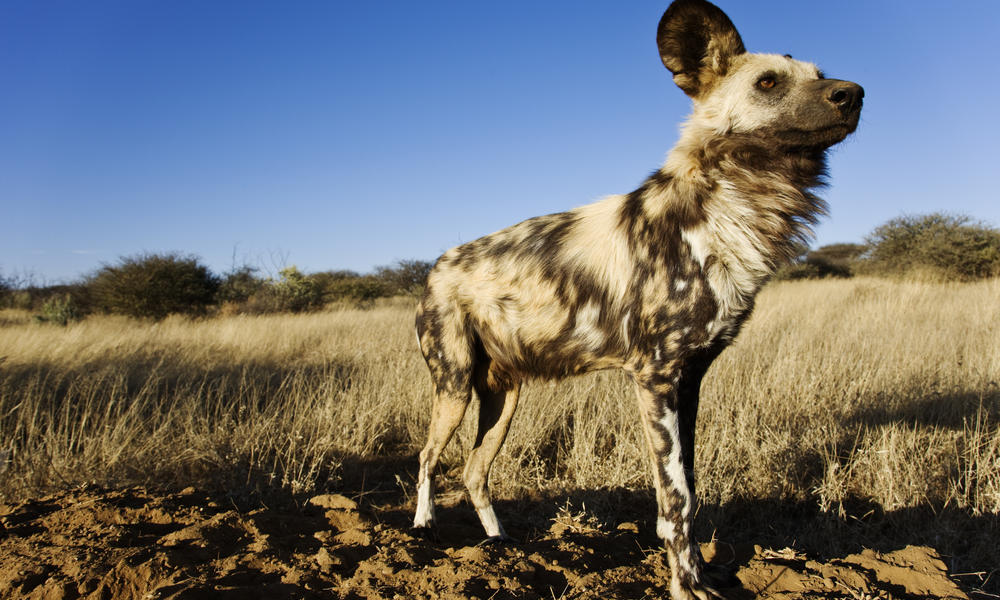 Before we dive into predators and protection methods of this wild hound, it’ll be beneficial to learn a bit more about them.

Here are some basic facts and useful information to help you understand this incredible wild animal.

These African dogs live in packs which are led by a monogamous breeding couple. The female will have a litter of between 2 – 20 pups, all of which the entire pack cares for.

These dogs are extremely social, hence the pack set-up, and they tend to share food among weaker or ill pack members.

Social “hang-outs” are a common occurrence and usually include communication through actions, touch and various types of vocalizations.

These dogs hunt in cooperative, formidable packs that consist of 6-20 dogs, sometimes more. Before these dogs became endangered, larger packs were more common.

These packs will hunt antelopes and may also attack larger prey like wildebeests, especially if they see an injured or ill quarry.

When there’s no larger prey available, they’ll supplement their diet by eating birds and various rodents. Also, since farms and settlements have expanded in Africa, the dogs have developed a taste for livestock, however, this will happen infrequently.

These African dogs face a few threats, however, one of the most pressing is the increasingly limited areas to roam due to human expansion.

They’re also vulnerable to diseases which can spread from certain types of domestic animals.

Predators of the African Wild Dog 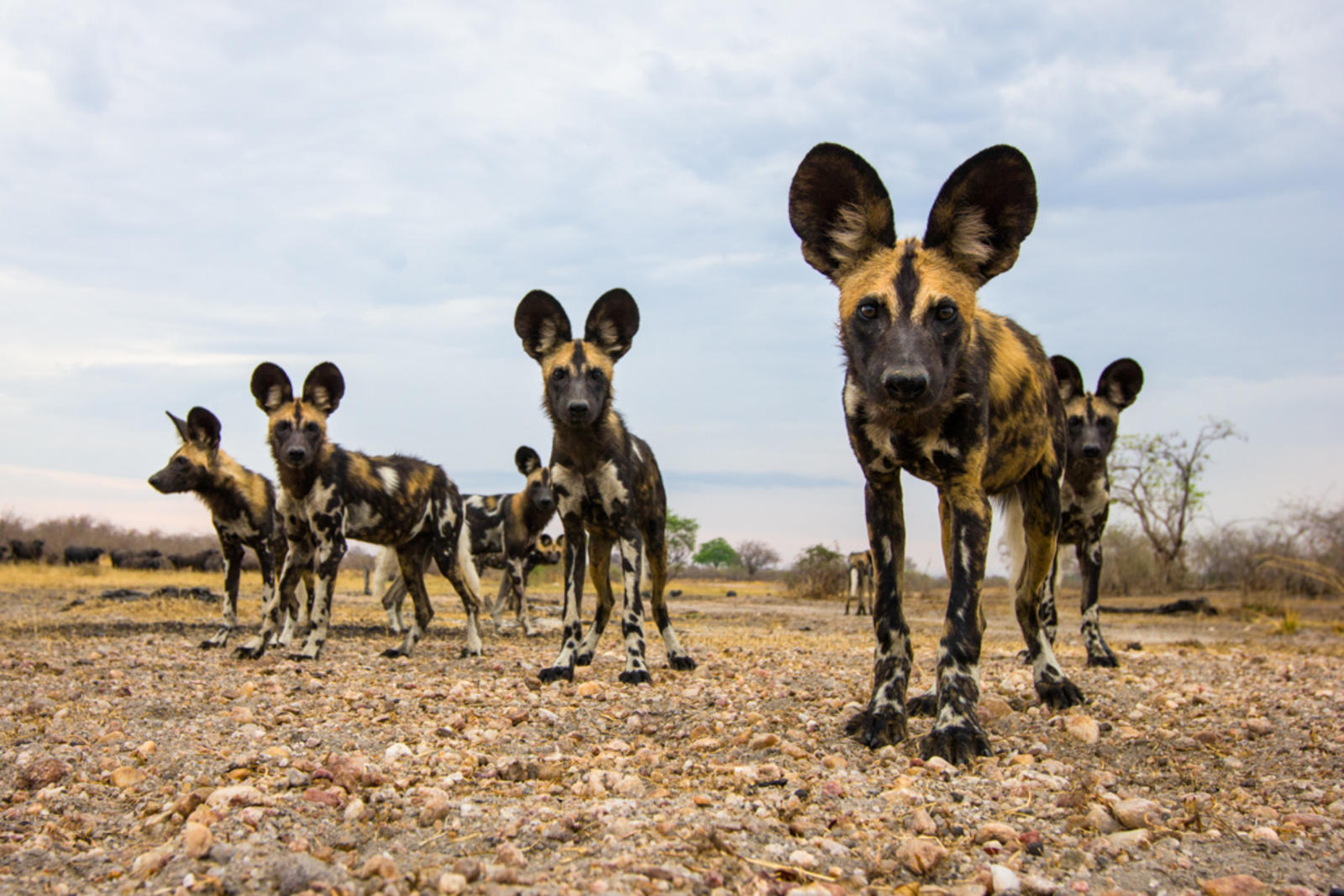 This African dog is about the same size as most large domesticated dogs.

Due to their size and the daily threats human civilization imposes on them, these dogs have some serious threats to look out for.

Since the wild dog roams in the open African savanna areas, expanding human civilization, angry farmers and domestic animal diseases are some of their biggest threats.

Though it may seem more likely for these dogs to be most affected by protective farmers with shotguns, domestic dog disease is actually a much more serious threat.

The combination of threats caused by human civilization encroachment had led to this wild animal’s placement on the endangered species list. To this day, there are only 5,000 African wild dogs left in the world and that number is extremely fragile as is.

While society expansion is the most threatening issue facing these dogs, they also have some natural predators they need to avoid as well.

Here are the top three predators of the African wild dog. 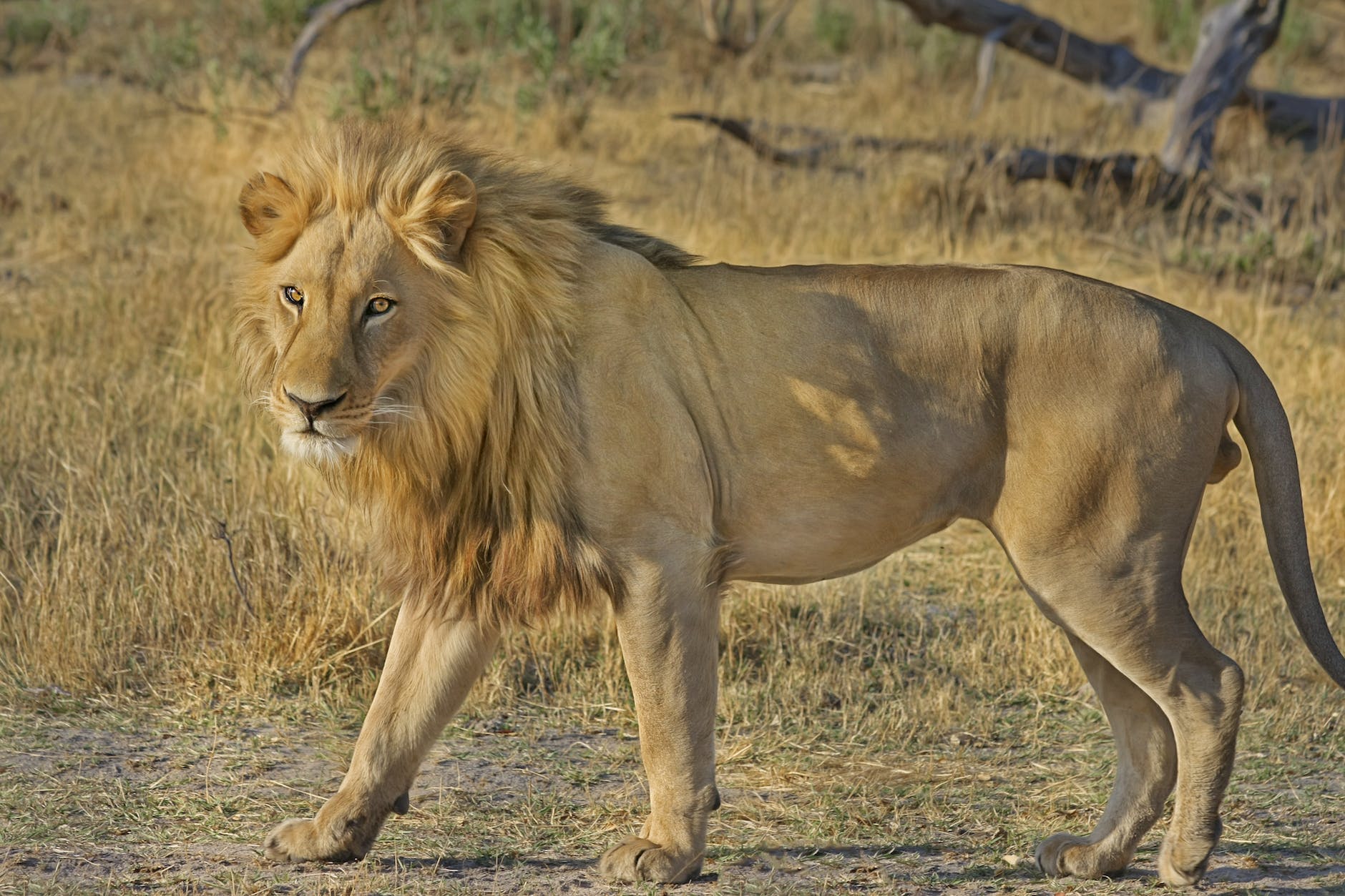 Lions are considerably larger and heavier than the African dogs. While the dogs weigh around 40 to 70 pounds, lions can grow up to over 400 pounds, making African dogs look like a nice afternoon snack to the lion.

Even though the dogs travel and live in packs and are much stronger and powerful when together, lions also live in groups and hunt in small packs, giving the dogs almost zero chance for survival.

Lions will kill as many wild dogs as they can, usually dispatching the pups while they’re at it. This makes these two creatures notorious enemies.

However, what’s interesting is that lions don’t actually kill dogs to eat them. Which is why it’s hard to understand why they attack them in the first place. Perhaps it’s just a classic case of cat vs. dog or something to do with evolution.

The rate of success African dogs have during their hunts is much higher than lions’ success rate. Because of this, lions tend to steal a wild dog pack’s fresh kill as opposed to hunting something of their own.

In the wild, lions are dog’s main threat. In an area with a high population of lions, there tends to be a low population of wild dogs.

Now it may be a bit easier to see where the saying, “fighting like cats and dogs” originally comes from. 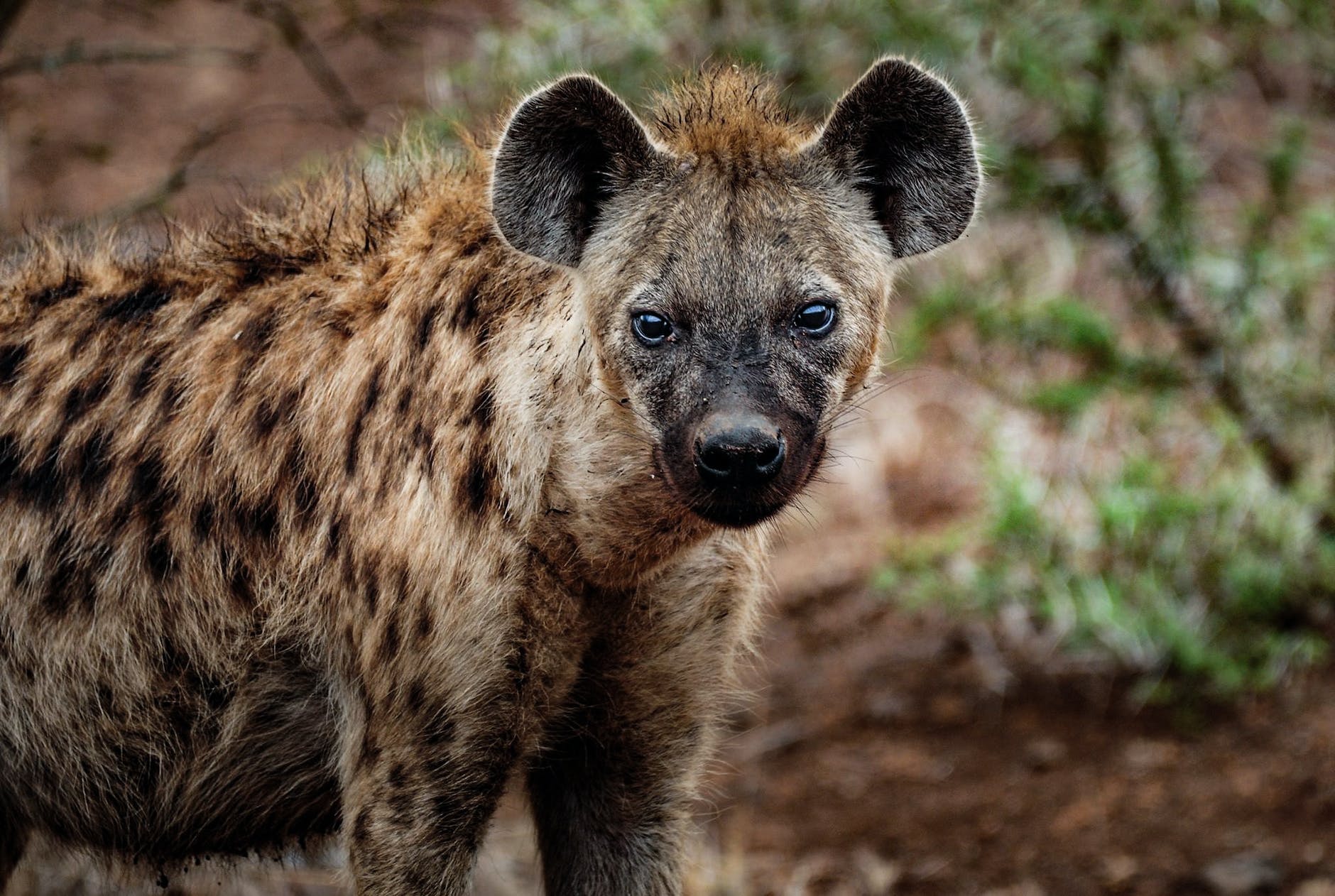 African dogs are also wary of the spotted hyena.

This mammal, which looks fairly similar to the wild dog in some ways, is a skilled hunter, however, tends to also scavenge fresh kill from other creatures such as the African dogs and lions.

The spotted hyena is the largest type of hyena, out of the three existing species.

National Geographic states that this type of hyena can range in size, anywhere between 110 to 190 pounds, which makes them over twice as large as the African dog.

These hyenas have extremely strong jaws and live in clans that tend to outnumber the dog packs, making them able to kill the dogs if they choose to steal and eat their food.

However, that being said, very few hyenas will actually outwardly attack adult African dogs, unless they need to get to their fresh kill.

While we briefly touched on human’s influence on wild dog numbers, at this point, it only makes sense to include them as one of these creature’s main predators.

Farmers tend to look at the wild dogs as vermin since they are attracted to the farmer’s livestock. Farmers will go to the extent of shooting these creatures with the intention to kill and even tracking down their homes to poison them.

However, not all human harm is intentional.

Some poachers’ snares that have been emplaced for other animals have been known to accidentally kill these creatures. And, as we mentioned earlier, the encroachment of civilization on these animals’ habitats also contributes significantly to their demise.

However, the main cause of this significant population decline is rabies, which is usually passed on by domestic animals. The reason why this is such a significant issue is that of these animal’s intuitively social nature. When one dog contacts the disease, the pack quickly becomes infected as well, wiping the entire family out in one swoop.

As you can see, these dogs have very few natural enemies. Humans are definitely the biggest threat to these incredible animal’s survival. Although there was no evidence to prove it, a long time ago they were considered pests and would be attacked by farmers and expanding civilization members out of fear of personal or property safety.

However, despite this fear, there has been no recorded incident of wild dogs attacking humans, only livestock when they become desperate enough.

How the Wild Dog Survives Against Enemies: The Answer Revealed 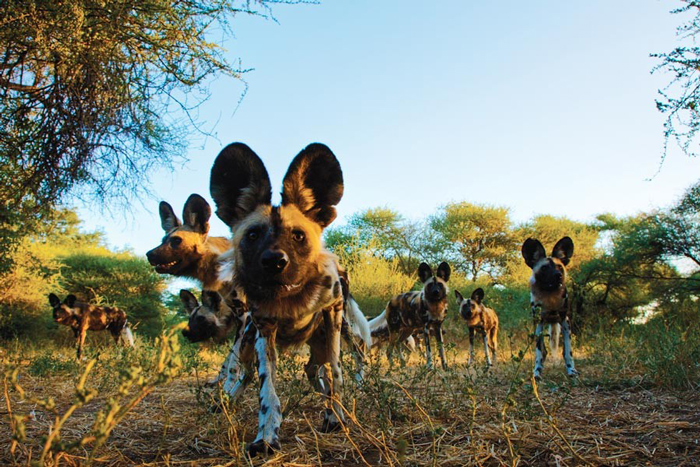 The reason why lions and hyenas are the African dog’s main natural predators is that they all rely on the same food source. As soon as dogs make a kill, they will quickly consume it in a type of organized fashion to avoid any issues with stalking hyenas or lions.

The African wild dog can defend itself when they face only one lion or a couple hyenas. This is due to strength in numbers. During an attack or attempt at stealing the pack’s meal, the dogs will circle the animal and then attack it together.

Due to the few predators that wild dogs have, their protection tactics aren’t fancy, dramatic or even powerful. However, it all comes down to strength in numbers. These dogs are social creatures who truly care for one another and tend to survive due to this bond. However, human civilization is making this sense of strength difficult for this incredible animal.

While they may have protection tactics against their natural predators in certain situations, they are deemed helpless when it comes to the irresponsible and reckless behavior of humans. Even though they aren’t your dog, they can and should still be loved.